Understanding Soybeans Sprouting in the Pod

Once again, we are seeing this phenomenon occurring in some bean fields in the Mississippi Delta and other areas this year. While not a major issue, it can cause yield loss in some fields when it occurs early enough and impacts a large portion of the field. 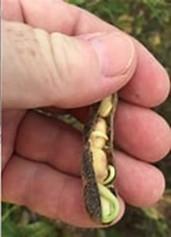 So, what’s going on?  In a nutshell, environmental conditions including prolonged rainfall and very warm conditions at the R-5/R-6 stage can cause seed to swell quickly and split the green pods. If these conditions persist, moisture is then allowed into the pods where seeds can actually germinate. You can see some examples in this photo courtesy of the University of Arkansas.

Fields that were stressed from dry conditions earlier in the season may also be more prone to splitting due to pods being less healthy and smaller. This situation can happen about anywhere in the U.S. in any given year as long as conditions are right to cause it. 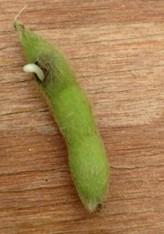 Soybean variety has very little to do with this situation occurring as described however varieties with low shattering scores may be more prone. The timing of the warm, wet conditions and the stage of growth of the soybeans is the major factor here. The photo to the left is courtesy of Amanda Douridas.

Another cause of sprouting in the pod may be the insect damage to the pod which once again may allow moisture into the pod pre-harvest. However, this damage would generally be much less significant than the other situation.