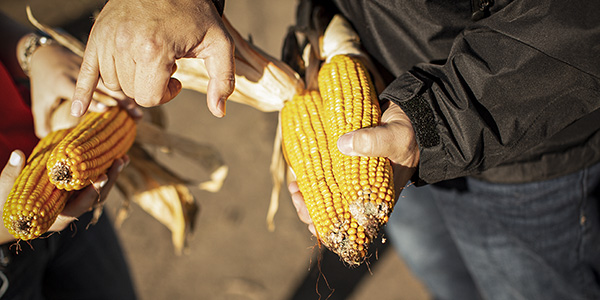 The windshield view of the crop has certainly changed towards the end of August and into September. In corn, foliar applications of fungicides are paying off well, especially against diseases like gray leaf spot, northern corn leaf blight, southern rust and tar spot. Hybrids that have excellent health packages like 59C72VT2RIB, 60C47STXRIB, 5650VT2RIB, and 66C44VT2RIB are looking really good. Stalk rots and hybrid intactness are also on the radar due to the heat, humidity and rainfall. Fields that were showing nitrogen deficiency late in the season should be monitored closely, as stalk cannibalization has been noticed.

Diving into the soybeans, August rains have helped to fill out the final pods. Early planted soybeans are looking excellent due to the increase in pod set. Weed control overall across the region has been good due to the flexibility of herbicide applications with the newer trait platforms. Sudden death syndrome (SDS) was observed in some fields, showing up most prevalent in low lying areas and high traffic parts of the field. In most cases, SDS was showed up late enough that yield shouldn’t see too much of an impact. Soybean varieties to keep on your radar that have good SDS scores are LGS3668E3, LGS3784XF, LGS3935XF and LGS4188XF.

Corn is progressing rapidly with recent rains that will help stabilize corn yields and significantly increase kernel depth. Rootworm feeding is becoming more and more apparent by the day, as storms towards the end of August lodged corn. Yields along the state line will be average, while counties to the south can expect trend line yields. Disease pressure is starting to explode on fields that weren’t sprayed with a fungicide, mainly tar spot, gray leaf spot and northern corn leaf blight.

Some early planted early group two soybeans are starting to turn naturally, but other fields are turning due to brown stalk rot, sudden death syndrome and white mold pressure. White mold gets significantly worse south of the state line and east of highway 39. Heavy winds that laid soybeans down and consistent soil moisture are the primary cause for the increase. Yields are expected to be average to above average.

The alfalfa crop has been exceptional this entire year with tonnage being up significantly and feed quality being very high.

This year’s corn crop looks the best that it has for the last couple of years. Western Illinois had every environment for disease this year, but LG Seeds hybrids seem to be handling it well, with help from fungicides that were sprayed on about 75% of the corn crop. Unfortunately, the area had a couple wind storms on August 24 and 25 that knocked some corn down in most of the territory. It could be a lot worse, but it is never fun to deal with corn on the ground. Yield estimates have been everywhere from 220-280. Corn is at full dent, and combines should be running by mid-September.

Soybeans have looked tough in western Illinois throughout the entire season. Looking back to April planted soybeans, they have been through a lot and are now starting to get SDS coming in. Along with the wind, the area has experienced beating rains to knock the beans down a little. All in all, we’re set up pretty good from Henry, IL to Havana, IL from east to west 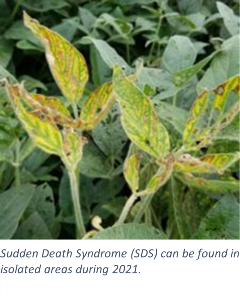 Despite good growing conditions and adequate rain in east central Illinois, the corn and soybean crops are showing signs of running out of fuel.

The corn crop is showing signs of poor nitrogen uptake and various disease pressure is taking a toll. Corn fields that received timely fungicide applications are showing very good response and tend to be healthier. Surprisingly, tar spot is not as overwhelming in east central Illinois as it is in western Illinois.

Soybeans are showing the presence of sudden death syndrome, which is overtaking a multitude of varieties from various seed suppliers. The soybeans still need a rain to stay alive and complete pod fill. A resurgence of new growth is not expected and will likely mean the end of soybean development.