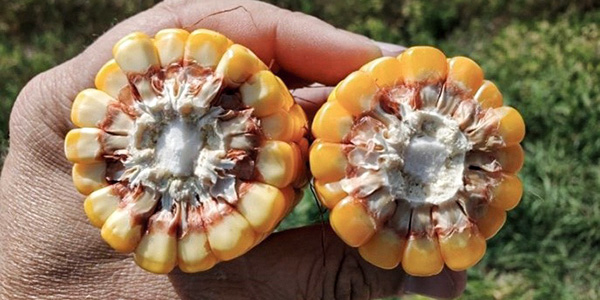 In corn, the ear is meant to stay sitting upright on the plant until the crop reaches physiological maturity, also known as black layer. Then, once the plant has hit black layer, the ear shank will start to deteriorate and the ear will droop and dry down to harvest moisture. However, during late season scouting this year, we found many cases where the ears drooped before the crop reached physiological maturity.

High temperatures, drought stress, genetics, and plant populations can all contribute to early ear drop. Most instances of this were found during the dent stage and can be attributed to very dry conditions since the beginning of August, combined with warm temperatures, which caused the crop to mature very quickly. Early ear drop hit the hardest in the last week of August during a hot week (relative to the time of year) with temps in the mid 90’s for five to seven days. The intense heat, along with present drought stress in many fields, appears to be the cause of the early ear drop.

Side Effects of Early Ear Drop

Early ear drooping kinks the ear shank and can completely stop the grain fill process on impacted plants, causing premature black layer. This will lead to smaller kernel size and reduced yields on plants suffering from early ear drop. The impact on yield is dependent upon the percentage of total plant stand that has drooped ears, and how far the milk line (starch accumulation) was before ear drop occurred. The farther away from maturity the plant is, the more yield loss you will find.

Early ear drop decreases the integrity of the corn's ear shank and increases the risk of ears dropping onto the ground. It is recommended that impacted fields be monitored as harvest approaches. That way, you can harvest them first if the ears could begin to drop on the ground.

If you suspect your fields suffered early ear drop, don’t hesitate to contact your local LG Seeds team or STAR Partner dealer. They’re armed with agronomic expertise and will help you make the right decision about how to proceed.