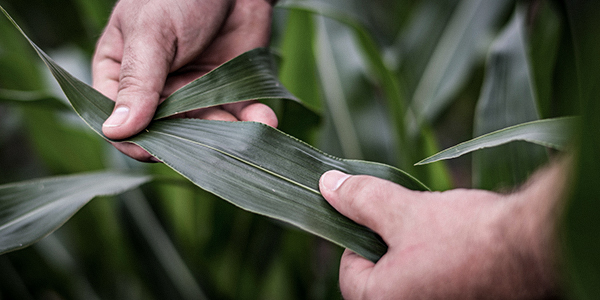 Numerous articles were written the past few months regarding the usage of nutrients by the previous crop, and the replenishment of the nutrients for this coming year’s crop.  With the current market prices, you certainly want to get the “biggest bang for your buck” for the best yield, and an optimum return on your investment.  With the ample rainfall and high yields from the past few seasons, enough fertilizer for this summer can be a concern for some growers.

If you obtained and analyzed soil samples from your fields last fall, or this winter, look for nutrients that have lesser quantities compared to 2 or 3 years ago.  Crops may use the micro nutrients in the soil in smaller quantities.  It may not seem like a lot, but in a 2-3 year span, the use may be enough to merit adding more of the nutrient back to the soil.  Below is a list of elements with the major and micro nutrients utilized by plants, and their function in the plant.  If one of them is in a very small quantity in the soil, adding it may boost the yield by eliminating a deficiency.  It may also help the crop better utilize other nutrients in the soil, just by the presence of it being there.

Five nutrients are usually addressed each year by growers.  High yields in corn and soybeans require an adequate supply of these five listed nutrients:

NITROGEN   Nitrogen is a major component in growing plants.  It is a component in proteins, hormones, chlorophyll, vitamins, and enzymes responsible for plant life.  Nitrogen metabolism in plants, is a big factor in vegetative growth, for both stems and leaves.  Plants short on nitrogen, may have yellowing and stunted growth.  On the other hand, too much nitrogen, may slow or prevent flowering.

PHOSPHORUS   Phosphorus is used in the photosynthesis process, protein formation, and basically all aspects of metabolism contributing to the growth of the plant.  This includes the development of sugars, and nucleic acids.  Phosphorus deficiency is usually associated with purplish leaves in young corn plants.  Older plants, however, may have a darker green color, and be stunted.  This may not be noticeable in a growing corn field, as the deep green color, may be conceived as a healthy look.  One may not be able to see the overall stunting in a field, as it may have an even, consistent, look to it.

POTASSIUM   Potassium is used in the formation of starches, sugars, and carbohydrates in plants.  It is also used for protein synthesis, and cell division for growth and reproduction.  It improves the physical sturdiness, and cold hardiness of the plant.  It also helps control water in the plant, both water absorption and loss.  Shortages may result in a physical appearance of spotted or curled leaves.  Most notable shortages are late in the growing season.  There will be weakened stalk strength, and sometimes severe lodging.

SULFUR   Sulfur is used as a structural component of amino acids, proteins, vitamins, and enzymes.  It is essential in the production of chlorophyll, so a shortage may show up as lighter green leaves.  A good supply of sulfur availability, likewise, may show a very healthy, deep green color.

ZINC   Zinc is a component of enzymes and aids the functioning of auxins, the plant growth hormones.  It, along with other nutrients, is essential in carbohydrate metabolism, and protein synthesis.  Plant growth hormones are important for internode elongation.  Zinc deficient leaves show interveinal chlorosis, and lead to iron deficiency.

The following are other elements and micronutrients.  These may be used in lesser amounts but can still be critical in the functioning of the plant and utilization of other nutrients, if overlooked.

CALCIUM   Calcium plays a role in the functioning of different enzymes throughout the plant.  It functions as a part of the cell walls, cell wall construction, is necessary for cell growth and division, helps control water content in the cells, and aids in the absorption and transport of other nutrients.  Once in a plant, it doesn’t move to other parts of the plant, as some nutrients do.  With this all said, it plays a big role in the overall plant health.

MAGNESIUM   Magnesium is in the chlorophyll molecule. It is active with the enzymes in the photosynthesis process.  Plant enzymes need it to function in the production of sugars, carbohydrates, and help stabilize nucleic acids.  In addition, it also aids in the transportation of the sugars inside the plant.  If deficient in a field, symptoms are yellowing between the veins of older leaves.

MANGANESE   Manganese is also involved in the photosynthesis process.  Its’ part involves the enzymatic activity, not only with photosynthesis, but also the plants respiration and nitrogen metabolism.  A deficiency appears similar to the veining of iron deficiency but doesn’t have the sharp contrast between veins and interveinal areas.

IRON   Iron is also necessary for enzyme functions.  It is used in the synthesis of chlorophyll.  It is very important in the new, actively growing tissues. Plants use the sources of iron sulfate or iron chelate in the soil.  Deficiencies are usually observed in alkaline soils whether natural, or over-limed.

BORON   Boron is used in cell wall formation, integrity within the cells, growth of the pollen tube, calcium uptake, and transfer of sugars to different parts within the plant.  It can affect several different functions including cell division, movement of hormones, flowering, seed development, water balance, and promotes root growth.  Boron is one nutrient that is needed throughout the life of the plant.  Deficiency symptoms vary between crops.  They usually show up as stunted, or irregular growth, on the newly formed parts of the plant.  Even though it is used in small amounts, a shortage of boron, can have severe detrimental effects on yield in some crops.  Likewise, since it is used in the reproductive stage of seed development, overabundance can accumulate in the reproductive parts, affecting both yield and seed quality too.

MOLYBDENUM   Molybdenum aids in the use of nitrogen.  It reduces nitrates to ammonia.  Without it, plant growth may cease, because the synthesis of proteins in a plant is blocked.  Nitrogen deficiency may then occur.  Molybdenum is even more important for legume crops. It is required by some soil microorganisms that fix nitrogen in the soil.  Deficiency symptoms show up like nitrogen deficiencies. Pale green leaves with rolled leaf margins, or stunted plants.  Molybdenum shortages can be common in nitrogen-fixing legumes.

COPPER   Copper is also involved in several plant enzyme systems.  It plays a part in the enzymes required for photosynthesis, and nitrogen metabolism.  It is also thought to play a role in the enzymes that use carbohydrates and proteins, and the stability of chlorophyll, and other plant pigments.  Deficiencies show up as stunted plants with die back on tips of new growth.

CHLORIDE/CHLORINE   Chlorine is available to plants as (CL-) chloride.  It is important in cell osmotic pressure, and the water content of plant tissues.  It is necessary in creating the ionic balance necessary for plants to take up mineral elements, and in the evolution of oxygen in photosynthesis.  CL can reduce the severity of some fungal diseases.   CL is found in the soil, bacteria, and fungi.  Deficiency symptoms may show up as wilted plants, stubby roots, or chlorosis on younger leaves.

SODIUM   Sodium along with chlorine, is involved with the water movement and ionic balance in plants.  (Similar to people and animals)

NICKEL   Nickel is a component in urease.  This enzyme catalyzes the conversion of urea to ammonium.  It can be beneficial for nitrogen metabolism in legumes and other plants.  Without nickel, toxic levels of urea accumulate.  It may, depending on the enzyme and its purpose, be a substitute cofactor for zinc or iron.

COBALT   Cobalt as well as Molybdenum, is required for nitrogen fixation.  It doesn’t appear to be needed by some crops, but it certainly is for legumes. The nitrogen-fixing bacteria need some cobalt to fix nitrogen on the roots.

SILICON   At this point, silicon isn’t considered an essential element for plant growth and development.  It is a component of the cell walls, however.  Plants with good supplies of soluble silicon, have shown tougher cell walls, resulting in better heat and drought tolerance.  There is some evidence, that it plays a role in the prevention of fungal infections, improved root mass and density, and increased plant biomass.

A crop, or any plant for that matter, has a very complex structure using many nutrients.  Understanding what some of the elements and nutrients do during the crop’s growing season, can be beneficial in attaining the highest yield possible. Looking for nutrient shortages and replenishing them, will be critical for next year’s crop.  With that said, in good moisture years, the root growth is much more massive and fibrous producing higher yields while mining more nutrients from the soil.  Conversely, if rainfall for the crop is less, your overall root growth will be less.  Consequently, it becomes imperative to have enough soil nutrients available in the soil for the best yields.

Download a copy of this technical document here: Nutrient Functions in Crops
< BACK