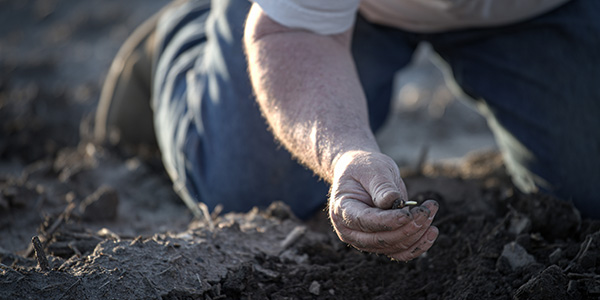 I’ve said before that it’s a fusarium world and we’re just living in it. However, the good news is that we have weapons to fight back against fusarium and other early seedling diseases. Of the many early corn seedling diseases out there, I’ve encountered these four the most: Fusarium (sp.), Pythium (sp.), Rhizoctonia, and Penicillium.

When corn seeds fail to establish an adequate stand, there can be many or multiple causes. Environment plays a huge part in getting your LG Seeds up and out of the ground in a timely matter. It also plays a big part in the disease triangle. The disease triangle is when the right environment coincides with the right host (susceptible plant) and the right pathogen (meaning the disease is present). All three factors need to be just right for a plant to be infected.

Pythium is one of the most common fungi associated with seed rot and seedling blight of corn. Several species of Pythium are associated with seed rot prior to germination or infection of young seedlings before or after emergence. Symptoms include dark, slimy lesions that cause the root or mesocotyl to shrivel. The outer cortex of the root may be rotted while the inner part, the stele, remains white and intact. This fungus is favored by high moisture and low temperatures and requires wet soils to produce infecting spores. Pythium can infect anytime between planting and midseason but is primarily a seedling problem.

Initial symptoms from rhizoctonia are brown lesions on the mesocotyl and roots of seedlings and young plants. Plants may be stunted or chlorotic, but often there are no above-ground symptoms. The most distinctive symptoms are reddish brown sunken cankers, which form on the roots, crown and brace roots of large plants. In older plants, infection can cause crown rot and brace root rot and plants may lodge due to a poor root system. Rhizoctonia can infect corn roots between 46° to 82° F. This disease tends to be more severe in irrigated corn.

At least six different species of fusarium that cause seedling diseases and root rots in corn have been identified. Plant susceptibility to root rot increases when plants are under stress or injured by herbicide applications. Fusarium root rot can move into the base of the corn plant, resulting in crown and stalk rot.

The roots and mesocotyl of plants infected with Penicillium may be discolored and rotted. Sometimes a blue-green fungal growth can be seen on infected seeds. Above-ground symptoms of this seedling blight include browning of leaf tips. Infected plants may turn yellow and die or remain discolored and stunted the remainder of the growing season. Penicillium tends to infect plants that have yet to develop nodal root systems. This fungus generally is favored by higher temperatures than the other seedling blight and early-season root rot fungi.

Below is a flow chart I use a lot when determining which disease is causing the issue. 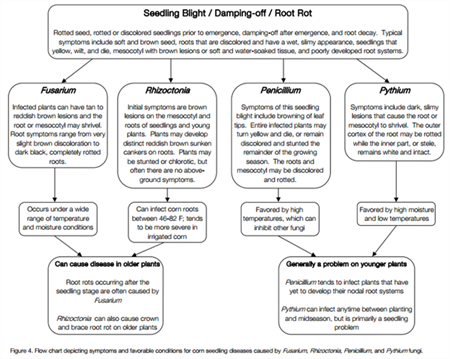