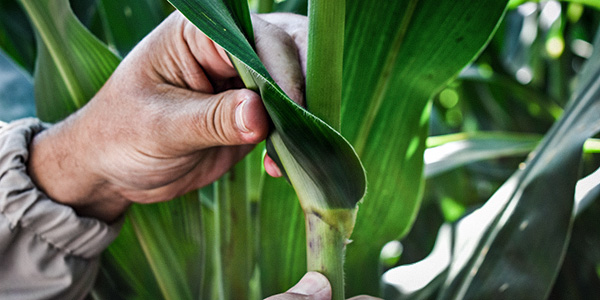 As we start in on the month of August, we are well in the heart of the growing season for most of the corn belt. This is an exciting time for a lot of us as corn growers because this is a prime time to evaluate hybrid differences and evaluate yield potential to expect at harvest time. Probably the biggest thing we watch this time of year is disease pressure in our fields. With many areas seeing timely rainfall and humid conditions, it is especially important to watch for disease progression and make sure we retain the yield potential in our fields.

When evaluating disease pressure in our fields, there are several factors that can favor disease progression and influence fungicide application decisions. Continuous corn, minimum tillage environments, and hybrid susceptibility are the biggest influences. It is important when scouting to check these fields first to see what disease pressure is like in your area. For hybrid disease ratings reach out to your Technical Team Agronomist or Sales Account Manager for information.

Below, we will go through the major corn leaf diseases in the Midwest. We will discuss conditions favorable for the disease, how to identify them, and how to manage them moving forward. 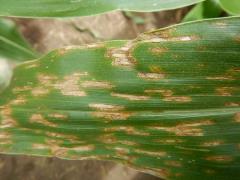 Grey Leaf Spot in corn is a very popular disease since it covers such a large geography in the Midwest. It is caused by the fungus Cercospora zeae-maydis and is favored by hot and humid conditions. Spores on infected residue splash onto lower leaves which is why the disease starts on the lower leaves and works its way up the plant. Grey Leaf Spot can also overwinter in corn residue so fields in continuous corn are the highest risk. The disease at first looks like small pinpoint lesions which makes it hard to distinguish at first but once the disease progresses it is rectangular in shape and stays within the leaf veins. Fungicides at VT are effective at controlling this disease at higher thresholds and hybrid tolerance is also a useful tool (Photo Courtesy of University of Illinois).

Northern Corn Leaf Blight is caused by the fungus Exserohilum turcicum and unlike Grey Leaf Spot, NCLB favors more moderate temperatures for disease to progress. The disease lesions are also long and oval and resemble a “cigar shape” and can be anywhere from 1-7” in length. The size of lesions a lot of times corresponds with hybrid susceptibility. This disease like Grey Leaf Spot can overwinter in corn residue so disease usually starts at lower leaves and works its way up the plant. Heavy dews and prolonged leaf wetness can cause more severity. When deciding on foliar treatment look at hybrid ratings and infected leaf area for treatment. Residue management in the future can also help prevent the disease in future years (Photo Courtesy of University of Nebraska-Lincoln). 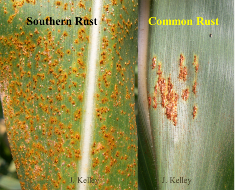 Southern Rust in Corn is caused by the fungus Puccinia polysosra and has quickly became a disease to pay close attention to. The disease finds its way to the southern states and central corn belt from tropical storms that bring the spores from the south to settle on corn plants across the area. The good thing about Southern Rust is that it requires a living host to survive so it does not overwinter. Southern Rust is usually seen as a bigger threat to yield as opposed to common rust, so it is important to distinguish the two apart. Common Rust is seen on both the upper and lower leaf surfaces and is usually scattered across the plant. Southern Rust is usually located only on the upper leaf surface and is orange and dingy in color and packed closely together. It is important to scout and monitor this disease because the earlier the infection, the greater the yield loss. Fungicides can help in controlling the spread and yield loss but hybrid selection is also key in disease management. Southern States and areas with a history of southern rust should avoid hybrids with low ratings (Photo Courtesy of the University of Arkansas). 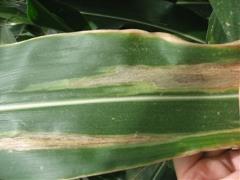 Goss’s Wilt is actually a bacteria rather than a fungus. It is caused by the bacterium Clavibacter michiganensis subsp. Nebraskensis. It was first found in the state of Nebraska and since has found its way in other states in the Midwest and can cause substantial yield loss. It is identified predominantly as a leaf blight and has a “water soaked” appearance with “black 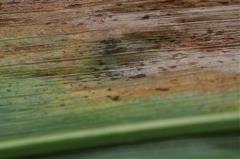 freckles” that cannot rub off. Early mornings or after a rain sometimes you can see bacterial ooze or when dry shows a shiny appearance. Infected plants show symptoms of droughty conditions and premature death of the plant. Conditions that favor the bacterial disease are hail damage or high winds that create entry points for the disease and wind driven rain can spread the bacteria. The disease can also overwinter in residue. Due to being a bacterium, fungicides cannot slow or prevent the disease. Our best line of attack is hybrid resistance so in areas with a history of goss’s wilt, strong scores against goss’s wilt should be a priority (Photos courtesy of Iowa State University). 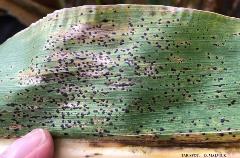 Tar Spot is a relatively new disease to the United States first confirmed in 2015. It is caused by the fungus Phyllachora maydis. When it was first discovered it was seen late in the growing season and very little yield impact was observed. In 2018 a yield reduction was observed across multiple states and since then more pathologists and universities began studying the disease closer to learn about management practices and control. It is identified as round raised black lesions scattered across the leaf surface on both live and dead tissue. There is still a lot to learn about this disease, but one observation that we seem to find is hybrids with overall healthy leaf disease scores tend to tolerate the disease more than hybrids with more average scores. We will hopefully have a better understanding of this disease and what to do in the future (Photo Courtesy of the University of Minnesota).