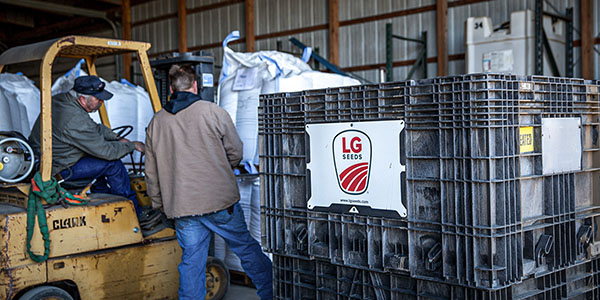 We had above average temperatures at the beginning of April, and it looked like we were setting up for a very early planting season this spring. Farmers are still ahead of what we’d call a ‘normal’ schedule, but the recent cold spell slowed down the start of planting in areas, especially as you move north and west. For a more local perspective, the Technical Team Agronomists in the northern region dive into how planting is progressing in their areas.

In our area a fair amount of small grains have gone in the ground, but planting progress for corn, soybeans and alfalfa has been slow. Fertilizer application is moving along, but many farmers are waiting for a warmer forecast and some areas, especially in Minnesota, are waiting for the soil to dry up from previous rains.

As of the end of April, northern South Dakota had very little corn and soybeans planted. Temperatures were cold and snow was in the forecast, so most farmers are waiting for things to warm up in May.

Planting is just starting to ramp up in southern South Dakota this week. In the southeast area, farmers are estimated to be 15% done with corn and 5% done with beans. In southwest South Dakota, both corn and soybeans are around 5% planted. Things are starting to move quickly though, so those numbers will be on a fast and furious rise soon.

In western and central Minnesota, farmers are less than 10% done planting corn and there are very few soybeans that have been planted. The recent rains and cooler weather slowed the process significantly. The beginning of May looks promising for planting weather so lots of corn and soybeans will go in the ground in the next seven to ten days. Soil conditions look exceptional for the most part as recent rain brought some much needed moisture to most of the area.

Soil conditions have been very good for much of southwest Minnesota, which means that many farmers got a jump start on planting corn, despite the cooler temperatures. Many growers in the I-90 corridor have more than half their corn acres planted, and some even finished planting corn in the last week of April. As we move further north, the Highway 14 corridor ranges from just starting to 75% planted on corn acres. Rain is expected in the forecast, which will slow things down a bit, but by the end of the week we’ll see a warming trend and a big push on planting corn, and some will get a start on soybean planting.

Rain has delayed planting in many areas, as many have picked up significant rain. However, a dryer than normal early spring meant that much of the manure and fertilizer application could be completed prior to the rain. We expect corn planting to resume at the end of April and progress rapidly.

Wisconsin has had mixed weather, which leads to mixed planting progress. Southwest Wisconsin is moving along at a steady pace, but it has been almost too dry. Some farmers will finish corn in the final week of April and many farmers have already moved on to planting soybeans. Southeast Wisconsin is in a similar situation. By the lake, the snow at the end of April slowed things down, but farmers were quick to pick up the pace as soon as conditions were right and most of the area is in full planting mode now. Northeast Wisconsin started planting because moisture levels were ideal, but the temps were colder than an agronomist would prefer. However, this week temps have warmed up and things are moving along quickly. Northwest Wisconsin has been hit with cooler temps and wet weather. Minimal planting is taking place and very few corn or soybeans have been planted. In a normal year we would expect the northwest pocked to be well ahead of where they’re currently sitting. Aside from planting, it has been dry in many areas this year so tillage work is increasing.

Planters are rolling all across Michigan. Many corn and soybean acres have already been planted and soil conditions are currently ideal, but they’re drying out quickly. Alfalfa that was planted early before the last frost is handling the cold weather and coming out strong. All in all, things are moving quickly but farmers would benefit from a shot of rain to keep moisture levels in check.