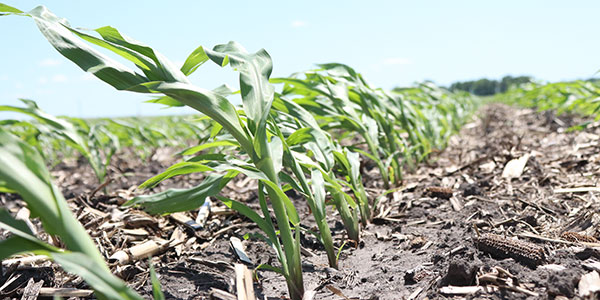 How to Combat Stink Bug Damage

Stinks bugs have generally only been an issue in the southeastern portions of the United States, but their populations and potential damage in the north have been on the increase. Some cultural practices such as no-till and the use of cover crops are the primary reasons why we are seeing an increase in their populations as well as milder winter temperatures.

There are several different species of stink bugs, but the primary ones that cause damage are: green stinkbug, brown stinkbug, and a newer species—Brown marmorated stink bug.  Brown stink bugs are shield shaped, flat and are brown with a yellow underside.  Green stink bugs are the same shape but are a light green with black bands on the antennae.  Brown marmorated have the same shape but are a brownish grey color with alternating white and black markings on the abdominal segments. 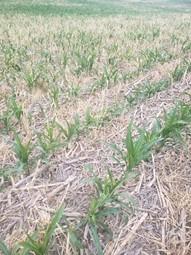 Stink bugs overwinter as adults in areas with heavy residue.  Two to three generations are produced every year and they are active from April to October.  They have a three-stage lifecycle which is egg, nymph, and adult and this takes 4 to 5 weeks to complete. The adults generally will be attracted to areas that are weedy or that have a winter crop such as wheat or annual ryegrass.

Stinks bugs have piercing and sucking mouth parts that excrete a digestive enzyme into plant tissue.  The damage to plants can occur from the physical damage from the feeding but the enzymes can also affect plant cell division causing stunting and even plant death.  The most prevalent damage to corn occurs before the plant reached the V5 stage with multiple plants in a row showing injury.  These plants will have stunted growth and in severe cases the plant will have multiple tillers caused direct injury to the growing point.  The feeding appears as identical holes with yellow halos around them caused by the stinkbug feeding while the leaf was rolled up.  At later stages, stink bugs will feed directly on the developing ears resulting in damaged kernels and deformed ears. 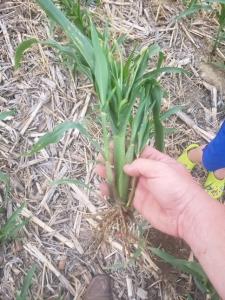 Soybean damage can also occur from feeding on the developing seeds in the pods resulting in shriveled, sunken seeds.

Management of stink bugs varies with the time of the feeding.  The University of Nebraska recommends treating stinkbugs if you find one stink bug per every four plants prior to pollination and I stinkbug per two plants during grain fill.  Thresholds for soybeans are based on using sweep nets.  Treatments are recommended when 5 or more stink bugs are accumulated in 15 sweeps.  Beat clothes are used in 30 inch or wider rows and one stink bug per foot of row is the threshold.

Green stink bugs are the species that are easier to treat.  They can be sprayed with acephate or pyrethroid insecticides.  The Brown stink bug is more difficult to spray, and it should only be sprayed with bifenthrin or acephate at higher rates of the insecticide with higher water volumes to get coverage.