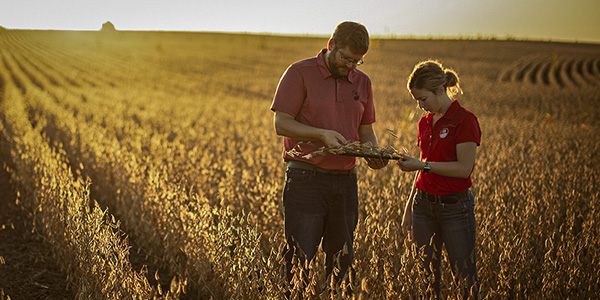 With the good moisture we had in the growing season and the drier, more stressful conditions during July and August, the prefect environment for disease presence has been created. If you’re seeing patches of soybeans dying in your fields, there’s a chance it could be charcoal rot. 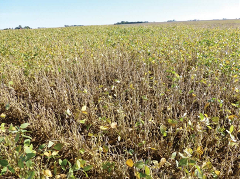 Charcoal rot in soybeans is caused by the soil-borne fungus Macrophomina phaseolina. The fungus causes a general root rot in soybean, infecting the roots and lower stems. Yield loss from charcoal rot is highly variable based on when conditions are favorable for disease to develop. The earlier hot and dry conditions appear, the greater the yield loss will be.  Fields under drought stress without charcoal rot will often survive an extra two or more weeks compared to those that are infected. Yield losses from this earlier plant death can be directly attributed to the disease. Managing charcoal rot is generally a game of maintaining adequate soil moisture when rainfall is limited. 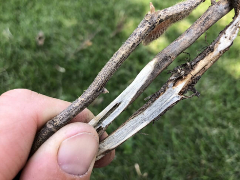 Typically, charcoal rot develops in the driest areas of the field first. Infected plants wilt in the midday heat, recovering at night, until eventually the permanent wilting point is reached. The first symptoms of charcoal rot are often a brown streaking in the taproot or secondary roots. At this point, the microsclerotia have not yet begun to develop. Infected plants may have premature yellowing of the top leaves and premature leaf drop. This is easy to mistake for normal maturity. Look for unfilled upper pods and generally lower plant vigor. In some cases, the upper one-third of the plant may have only flat pods without seed. If hot, dry weather continues during the R5 to R6 growth stages, a light gray discoloration often develops on both the outer and inner stem tissues and on the taproot and secondary roots. On mature plants, the microsclerotia are easily seen embedded in grayish areas on the outer stem tissue, often without the need of a hand lens.

To manage charcoal rot, plant the fullest-season varieties that are practical for your area. Plants are most susceptible to charcoal rot beginning at flowering. The longer-season varieties tend to flower later and are still in vegetative growth stages during the hottest, driest portion of the growing season.

Another way to manage the disease is by using narrow rows, which results in earlier canopy closure and can help reduce disease losses by reducing soil moisture evaporation. Consider rotating to non-host crops for one to two years in fields with a history of charcoal rot. Wheat and other small grains are good rotational choices. Although corn, grain sorghum, sunflowers and other crops are hosts, research has shown that charcoal rot strains have host preferences.

Lastly, add supplemental irrigation to the infected field, if possible. This is the most effective way to manage the disease but is not always an option for all farmers.

If you believe you have charcoal rot in your fields, contact your local LG Seeds STAR Partner or Technical Team Agronomist for an official diagnosis and treatment plan.