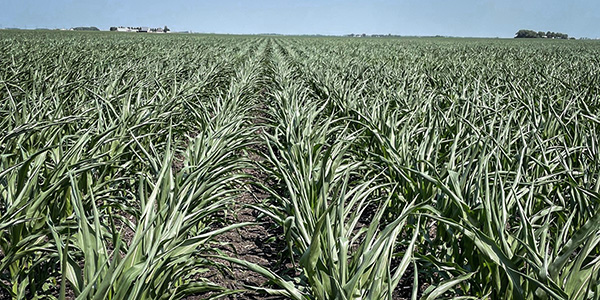 The 2021 growing season has proven to be challenging in all areas that crops are produced. Flooding in the south, severe droughts in portions of the west and areas to the north, low temperatures in the spring resulting in stand issues and, most recently, frost damage in the north. In the middle of June the weather switched gears and the heat cranked up. Temperatures have reached up to 100 degrees in the Dakotas and Iowa has been in the 90 degree range. Western Iowa received some much-needed rainfall early in the week of June 14, but it was minimal with reports from no rainfall to around an inch with .2 to .5 inches being the most common.

One of the factors impacting the crops in Iowa is not only the current drought conditions, but the fact that we have been in drought for more than a year. This map from Iowa Mesonet that shows the departure of rainfall from June 1, 2020 to June 12, 2021 compared to average of rainfall from 1953 to 2020 in this same period. 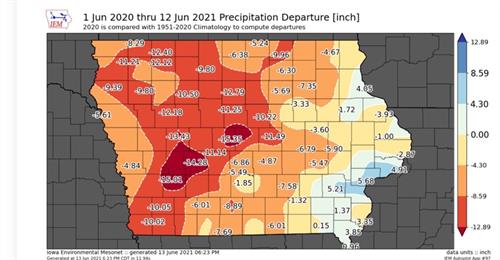 When you look at moisture loss to date, evaporation is the major issue because most of the plants are in the V5 to V7 stage and transpiration rates are low. Transpiration rates increase as the plants advance through the vegetative stages and leaf area increases. This results in higher evapotranspiration losses, which is a combination of both evaporation and transpiration. Soil temperature comparisons between high residue situations like strip till into cover crops vs tilled soils have been as high as 70 degrees difference with some tilled soils temperatures at 160 degrees. The areas that were first affected were areas of compaction, light soils and fields that have been in continuous corn. The combination of these factors has resulted in slow root growth that is limiting the plant ability to pull moisture from the soil. Research has shown that root growth in corn-on-corn situations have half the root mass when compared to corn grown in crop rotations. Now, we are seeing plant stress in high clay soils and in corn following soybeans as well.

Leaf rolling is the major symptom of drought conditions. Leaf rolling occurs because monocot plants have bulliform cells that are three to five cells wide and span the length of the mid-vein of the corn leaf. It is proposed that they have a specialized cuticle layer that is more water permeable, and with the bulliform cells’ ability to shrink more than other leaf cells, it causes the leaf to roll. This reduces transpiration moisture loss and gives the plants more time for conditions to improve or more importantly receive rainfall. The plants have been recovering at night, which is a positive sign, but the earlier the plants begin to roll or the longer the period of rolling, the more stress the plant is under.

Mark Licht with Iowa State University states that yield loss is assumed when drought stress occurs for four or more consecutive days. The type of yield loss varies depending on the stages the corn plant is in. Early vegetative yield loss occurs from the potential loss of leaf area and making the plant speed through development, resulting in shorter plants. Ear diameter is being determined at the V6 to V8 stage, and ear length is determined from V8 to V17. Drought at these stages can impact the overall potential of the ear size. Corn that is pollinating can suffer from drought stress by reducing silk elongation, and drought can also impact the timing of silking and pollen shed. Temperatures above 100 degrees can even kill the pollen grains. Plant stress during the grain fill period can result in kernel abortion or smaller light test weight kernels.

The greatest yield loss occurs when the corn plant is in the pollination stage, which can reduce yields by up to nine percent, and corn in the vegetative stage can see reduced yields of up to five percent.

It’s difficult to look at percent yield loss and relate it back to actual yield loss. There is still a possibility to receive ample rainfall and for the crop to product good yields. 1992 is a good example of a year where the corn belt experienced similar plant stress conditions, and then rainfall came resulting in very good yields. Some recent weather models are showing that our weather pattern is going to change, and temperatures are going to go back down below normal for this time of year through June. Because of this, the high ridge that has been limiting rainfall is moving west, allowing rainfall back into the dry central corn belt. All hope for a productive crop isn’t lost.