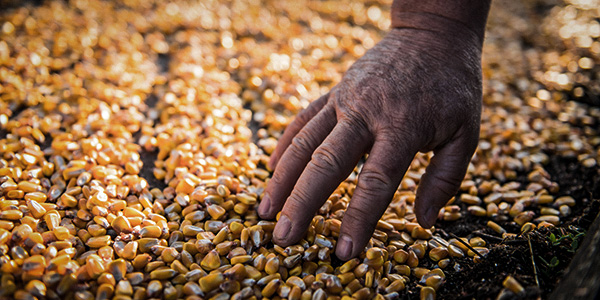 Hot and dry conditions in the Midwest have brought concerns about the yield potential of crops, but these conditions also can bring issues with grain quality; mainly from the ear molds Aspergillus flavus and Aspergillus parasiticus. Compounding this issue is the recent Derecho windstorm that hit the central United States with hail and wind, which causes injury to the kernels promoting mold growth.

Aspergillus ear rot is a powdery, olive green mold that is usually found at the tip of the ear on discolored, shriveled kernels but it can also be found scattered on the rest of the ear down to the base. 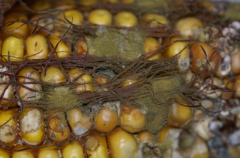 Infection occurs when spores from the soil or crop residue infect the ear during the late pollination process with yellow, green silks being the most susceptible. The spores germinate on the silks and grow down infecting the surface of the developing kernel. This process is favored by temperatures that are above 86 degrees during the day and soil conditions are dry. When the kernel reaches moisture content of around 32 percent, the fungus colonizes the internal cells and grows until the moisture reaches 15 percent.

Scout your fields for the presence of Aspergillus ear rot in 10 different areas prior to harvest. Areas that have been under severe stress have the highest potential for the presence of ear rot and 10 ears in each area should be husked and inspected. If more than 10% of the ears are infected with ear rot, then the field should be scheduled for early harvest when moisture is between 20 - 25%.

Insurance companies should be notified immediately if ear rots are found before harvest or strips should be left in the field because this is the only way they will adjust claims for grain quality issues. If grain does have the presence of aflatoxin, then markets need to be found for the level of infection. Ethanol plant tolerance of aflatoxin is lower because it has been found that the toxin level can increase up to three times in the feed by-products of ethanol production.

If a field has been infected with aflatoxin, the grain needs to be tracked to its marketing source and proof of these sales should kept in your records.