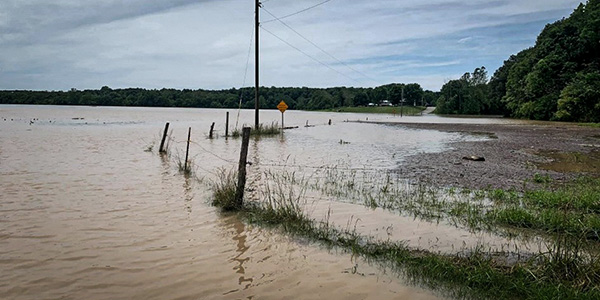 Flooded Corn and Soybeans: Will they survive?

The central and western Corn Belt is dealing with drought conditions, while the east and southern Corn Belt has had torrential downpours, strong winds and hail. But how much water can corn and soybeans handle before drowning? Like most everything in farming – it depends.

The further along the corn crop is, the better chance it has to survive flooding. Fully submerged corn at the V6 stage can survive about two days under hot conditions and up to four days with cooler, cloudy conditions. However, the speed the water evaporates or runs off at is key. If you see new growth three to five days after the water has retreated, odds are your corn will live – but not without some damage.

Root development is weakened in saturated soils, which can lead to more problems later in the year. Diseases like crazy top and crown rot could be more of a problem in these areas, in addition to nitrogen loss due to leaching. If the flooded area is large, additional nitrogen will help your yield potential.

Soybeans are subject to the same issues as corn, where duration of water and temperatures are key in the time they can survive. However, soybeans can survive longer than corn in flooded conditions. Generally speaking, beans will survive four to six days submerged in hot, sunny conditions, and seven to ten days in cool and cloudy conditions.

When you’re assessing soybeans after flooding, look for new growth from the top of the plant a few days after the water is gone. Unless you get another shower right away, it will be easy to see the nice green growth popping up from the dried, mud-covered beans. Similar to corn, disease pressure becomes an issue in flooded soybeans. Be on the lookout for water-loving pathogens like Pythium and Phytophthora Root Rot.

Download a copy of this technical bulletin here: Flooded Corn and Soybeans: Will they survive?