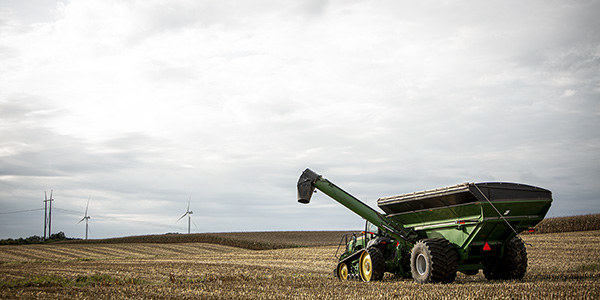 The hottest topic in corn recently has been the continued spread of tar spot and southern rust. Indiana has continued to experience ideal conditions for these two diseases to develop: foggy mornings, overcast skies, high humidity and daily popup storms. Farmers who sprayed fungicides earlier in the season are now seeing the residual activity window closing and new flushes of both diseases. Now, farmers are evaluating if they should spray again, and the answer to that question is very situational with some choosing to spray and some not. The fields that weren’t sprayed with a fungicide are drying out fast, but overall there is a lot of yield potential left out there. Harvest will likely start next week on the dry fields or fields with heavy disease pressure.

In contrast to corn, there’s been very little talk about disease or other pressure in soybeans. So far, any cases of disease or insects has been very minimal. Northern Indiana experienced a dry stretch in July and early August, but the last few weeks have brought ample rain to most. Some early planted fields with early varieties are starting to turn. Four bean pods aren’t hard to find and seed size looks good. Yields likely won’t match last years, but will still be impressive.

Corn harvest began in the lower Delta in early August and progressed northward into west Tennessee and southern Kentucky in the first week of September. Yields have been good in most areas with average yields slightly below the past few years. It remains to be seen if the second wave of planting will perform better than the earlier acres. These later plantings didn’t have the extended cooler temperatures to contend with and grew at more normal pace. The downside to these plantings was the heavy southern rust pressure that came in during early to mid August. While many fields in the mid-south got timely fungicide sprayings, those that did not may have lost some yield off the top end.

Just as in 2020, many soybeans were planted very early. However, this years’ crop missed some of the frost events we faced last year. In many areas, the bean crop has flourished with adequate moisture. Late pod set and fill at the top of plants has added bushels in these cases. Some of the earliest fields will be harvested as soon as they dry from the rainfall in late August. The Mississippi Delta area suffered from one major weather event in early June that devastated thousands of acres in east central Arkansas and west central Mississippi. Some of these acres were planted to soybeans once conditions allowed, but a large number were left as a total loss. Disease pressure in soybeans has been unexpectedly mild, especially considering the environment we had much of the summer. Sudden death syndrome and frogeye leaf spot caused issues in scattered areas, but could have been much worse.