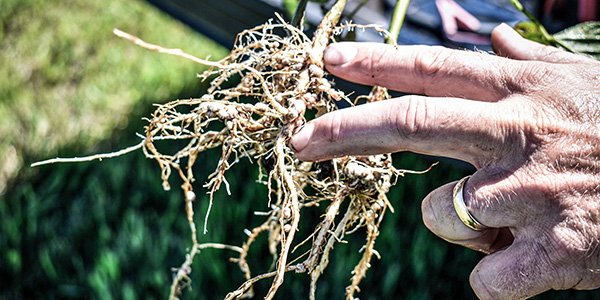 How To Choose The Right Cover Crop For Your Farm

When you’re determining which cover crop to use on your farm, there are two things to think through: what crop you will plant on the field next year, and your goals for the cover crop. The most common cover crop used in south east Iowa is cereal rye, but if you are planting ahead of corn and your goal isn’t erosion control, then cereal rye probably isn’t your best option.

Rye grows aggressively and gets tall and thick in most instances. This is great if you are trying to control erosion and if you are planting soybeans into it next fall. However, rye has a high carbon to nitrogen ratio, which means that it will use all the nitrogen from the soil that it can, and it takes a long time to release that nitrogen back to the soil after the rye is terminated. Because corn needs that nitrogen in the soil, rye isn’t the best cover crop to plant before corn.

Wheat is another common cover crop, and the biggest difference between wheat and rye is the soil temps they thrive in. Rye will start growing at soil temps of 38 degrees, but wheat doesn’t start growing until soil temps reach the mid-40s. Because of this, rye gets much more growth in the spring because it will start growing sooner. If you’re looking for a cover crop ahead of corn, this temperature difference gives wheat the advantage. You don’t need to be as concerned with wheat growing too much before you can terminate it. The carbon to nitrogen ratio is also lower on wheat than rye, so when it is terminated the nitrogen it scavenged will be released to the soil faster than with rye – making it a better fit for before a corn crop.

A third commonly used cover crop is oats, which are often used as an “introductory” cover crop. Oats will not overwinter, and by the time planting rolls around you will hardly be able to tell the oat crop was ever there. Because it doesn’t last through winter, your farm doesn’t receive as much benefit, as there is no crop growing in the spring to stop erosion or scavenge nitrogen. However, oats ahead of corn is a good option for ease of planting – you don’t need to worry about planting into ground that has decaying plant material on it like you would with wheat or rye.

While wheat and rye are the most used cover crops in southeast Iowa, we sometimes see a mix of cover crops behind chopped acres. This mix could consist of rye, oats, wheat, radishes, turnips, peas and vetch just to name a few. As an agronomist, I commonly recommend the mix of rye, radishes, and peas. The legume (pea) added into the mix produces nitrogen that is then released back into the soil for the next crop. The radishes act as natural tillage by growing very large and leaving voids in the soil when they die, which act as a tillage pass.

Location plays a large factor in selecting cover crops. If you are considering adding cover crops to your farm, reach out to your local LG Seeds agronomist to learn about your choices and what the right mix looks like on your farm.