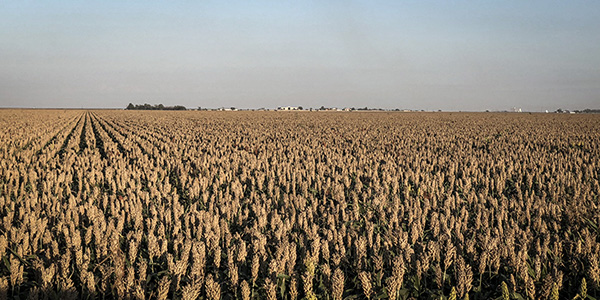 Corn and Sorghum Harvest is in full swing in the Texas Panhandle. The area avoided a freeze the week of Labor Day and, in general, corn north of Amarillo looks to be in pretty good shape where water wasn’t limiting. Corn south of Amarillo endured a hot dry summer and was significantly more stressed. Growers with good water fared better than those without. In the rest of the state, cotton has neared completion. Corn and sorghum yields were average to above in much of the area, although some geographies didn’t catch the rains necessary for optimum yields.

Late winds were hard on corn in the Central Valley, and lodging was noted in quite a few areas, especially on silage acres. Much of the corn has been harvested in the area, with a few fields remaining. In areas where the wind was less of an issue, yields seemed to be on track with normal years.  Alfalfa seeding has been progressing and the LG Seeds lineup is looking good so far this Fall. It has been dry with a dry pattern expected continue into the Fall, so moisture may be an issue heading into the spring planting season.

Several plots were harvested in Idaho over the last few weeks as corn reaches maturity.  Yields are generally pretty good, although some growers in the area feel they are down slightly from normal due to the smoke and haze over the last 30-60 days from the western wildfires. Many of the new products from 97-104 days have been performing well throughout the geography.

Eastern Kansas and Missouri are tracking at about 80% done with harvest on corn and soybeans. 66C44 and 62C35 are showing to be a top end yielders across all areas. 66C44 has shown tremendous flex with fantastic yields and great late season standability. 62C35 continues to compete with fuller season hybrids across all environments, from marginal acres to highly productive acres.

As of October 20, harvest completion in the area varies depending on location. Precipitation and how much you did not receive seems to be the common theme across the region. Our biggest limiting factor this past growing season, as it is every year, was water.  Areas that caught timely rains and irrigation wells without water limits, well size, or pumping restrictions are having better results than areas that were the driest in 30 years and couldn't pump enough water to make up for it. Yields vary greatly in both the irrigated and dry land crops. We have learned a great deal about some of our new product releases this year and are looking forward to placing them with growers in the upcoming 2021 growing season.