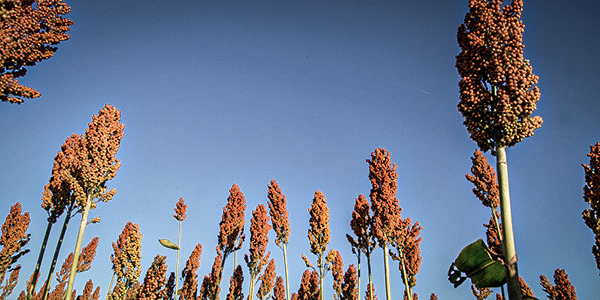 Correlation Between Sorghum Height and Yield

Many sorghum breeders and growers alike have preferred shorter sorghum hybrids over their taller counterparts for a number of reasons, the largest of which is likely standability. As a result, many of the most popular hybrids in the market today are ones that have a shorter to moderate height and ideally, good standability. However, there is a growing body of research that suggests a positive correlation between plant height and grain yield in sorghum. As a result, some researchers believe there may be significant gains to be made through selecting taller varieties that still have good agronomic characteristics such as standability.

Texas A&M has done some work on attempting to correlate sorghum height with grain yield in their replicated state trials during the past several testing cycles.  They noted that later maturity hybrids tended to be both taller and higher yielding in all production areas in Texas, as can be seen in the Table below.


While it isn’t surprising to see plant height and yield both increasing as one moves to later maturity hybrids, one other interesting note was made in their analysis. Their initial look shows that even within a maturity group, taller hybrids generally yielded better than shorter hybrids. In other words, among medium maturity sorghums, for example, they generally saw the taller hybrids yielding more. It is still a bit unclear from their work whether the increase in yield is due more to small variations in maturity within the maturity groups that they measured, or truly due to a correlation between height and yield, but Texas A&M is not the only group to have noted this correlation.

Researchers from the University of Queensland in Australia have reported similar findings regarding the link between sorghum plant height and yield. Their research was primarily looking at the effect of the major dwarfing genes being used in sorghum breeding.  They have reported that the incorporation of some of the major dwarfing genes into sorghum resulted in as much as a 10%-20% reduction in yields and above ground biomass, and that more biomass was allocated by the plant into the root system. This is contrary to dwarfing genes that were previously introduced in wheat, where the introduction of the genes resulted in more allocation of biomass into producing grain. They also reported that even within plants that carried the same major dwarfing genes, the taller hybrids tended to yield better than the shorter ones. Their work suggests future research is needed to confirm their findings and further explore the possibility of speeding genetic gains through plant height manipulation.

Both groups of researchers also addressed potential standability issues that may occur with taller hybrids. The group from Texas A&M reported no correlation between the plant height and standability in their trials; however, it should be noted that the varieties being entered in their trials are usually either commercial hybrids or nearly commercial hybrids which have already been selected for standability. The group from Australia noted that standability might be a concern, but that selecting and breeding for improved standability among tall products may be the route to take given the potential for increased genetic gain by selecting for taller hybrids. Grower acceptance of taller hybrids is another factor to be considered, but if sorghum breeders can capture some major yield advances with taller hybrids without sacrificing standability, a move towards taller grain sorghums may be coming.

If you have further questions about grain or forage sorghums offered through LG Seeds, be sure to talk with your LG Seeds SAM or TTA about the lineup for the 2018-2019 season.

Download a copy of this Technical Bulletin: Correlation Between Sorghum Height and Yield
< BACK