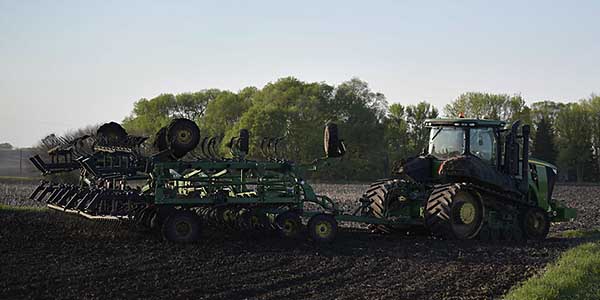 Since we are in the planning stage of the growing year, now is a valuable time to get seed plans done for the upcoming season.  One of the biggest decisions when making our seed plans, is what population to plant the hybrids that we’ve selected on a field by field basis.  Although the answer to that question is very different depending on where you go and what hybrid you plant, it’s important to test on your own farm.

There are a lot of decisions to be made from hybrid selection to what trait options to utilize, but plant population is a decision that can really affect your bottom line.  Although hybrid selection is important, it is equally important to plant at the optimal population.  Every hybrid has a different population curve.   These hybrid curves are vital for our Advantage Acre® platform which can help us position products at the right population in variable areas of the field.  But if you want to learn for yourself, Advantage Acre allows us to put multiple 2-acre test blocks into a static rate field with populations at the average of the field, +2k, +4k and -2K to help us to decide which population gave us the most return on investment.  Optimal population densities vary greatly from hybrid to hybrid depending on whether they’re a fixed or flexed eared hybrid.

Over the past couple growing seasons we’ve had the opportunity to do a few population studies of our popular hybrids in the 94-105-day maturities across South Dakota.  These trials have expanded on what the concept of the test blocks within Advantage Acre® are, but at a wider population range.  They have helped us learn more about how these hybrids respond to low population (under 20K), higher populations (above 34K), and stair stepped blocks in between at 4k intervals.  How multiple hybrids respond to these varied situations has helped us make better recommendations.  It is very interesting to see how plant structures differ at different populations.  Certain hybrids tend to tiller more than others which usually means ability to double ear at low populations.  With the way our variance is in moisture from year to year it is extremely important to know the capabilities of the hybrid.  Below is an example of one of the trials from two seasons ago. 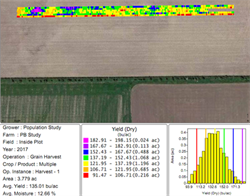 In this area of the country, 24k-26k is a typical planting population for a field average. But in this trial, we learned that when we pooled all the hybrids together, the 17-19k (target of 18k) population blocks were the highest yielding at 140.40 bu./acre.  Given how dry it was throughout the growing season when this test was done, this was not surprising.  Right behind it was the population block of 26k-30k (target of 28k) at 138.68 bu./acre.  But where the value really comes in the data is looking at where the largest return on investment is for each hybrid based on yield/planted population.  Without getting into too much detail about this specific trial as it only pertains mostly to a western environment, the important thing to remember is this is just an example of a way to test multiple hybrid curves.

A lot can be learned from Advantage Acre’s test blocks, or conducting your own population study, however you decide to set it up.  Testing these products on your own farm to learn more about hybrid characteristics, and the right population that gives you the most return on investment. is still the end goal.